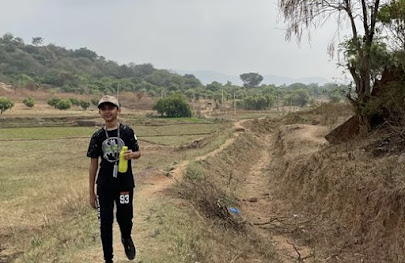 I woke up at 4 am and went to my school. It was so early in the morning. We then went on a nice white bus. It took us one and a half hours to reach Karadi Kallu Betta. It was a superb place and it looked beautiful. The lead instructor told us that it was called Base Camp. I was wondering “If the Base Camp is cool looking, how good will the trek be.” 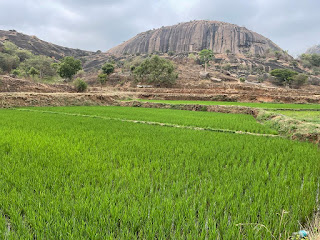 So then we went on a trek on the hill(Karadi Kallu Betta) , where we climbed four hills. One tip for when you go there – make sure not to get hit by the cacti because I got hit! The first hill was Karadi Kallu Betta, The second one was very steep but it had a cave that we enjoyed a lot, the third one was made of stone and very high but it was very good and the fourth one looked like a toad.

After that we went to Rappelling(Raa-pell-ing). If you don’t know Rappelling is basically where you climb up with a rope then you come down holding the rope. It was very fun and challenging. 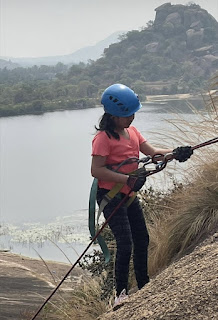 Then we went Kayaking. We went in the same boat, saw some fish and our boat went really fast. It was one of the best things. 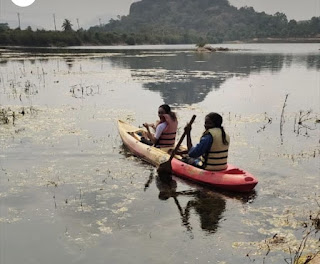 Now it was time for the best part! Drumroll please . . Ziplining! I really loved ziplining. They first gave us gear and we had to go, they buckled a pin to the suit and asked us to hold it, then they asked us to jump. It was so good looking at the water while on a rope! If I had taken a picture, I would have kept it as wallpaper on my phone!

After that, we played cricket.  I was the umpire while my friends played. It was fun but eventually, the ball fell into the snake pit and we stopped. We definitely did not need a snake as the third umpire! Then we had a Rain Dance. It was very fun but let’s just say we did not really dance and instead kicked the water in people’s eyes but we had fun and hey they didn’t shout, so win for us?

Finally, we had snacks and came home on the bus, the person next to me vomited but I didn’t bother too much because this was a trek and trek=adventure.

I then came home and learned a lesson. Even though you might get hurt, scrape your legs, get hit by cacti, fall into the water or even puke, it’s all part of the wonderful adventure called trekking. So, no matter what happens, trekking is an adventure. Shine and never whine!

ABOUT US
TrekNomads is a community for trekkers, travelers and adventure enthusiasts who like to explore nature with utmost comfort and luxury.
Contact us: info@treknomads.com
FOLLOW US
© Copyright 2019: TrekNomads